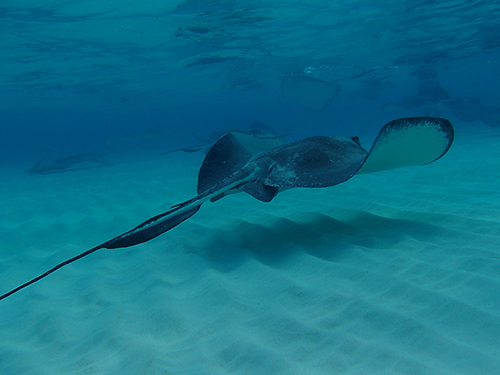 First, Nick and Noel both had decades of boating experience. Nick as a tour boat captain and Noel as a private boater. Second, they both had needs. The need to pay bills! Third, they both possessed an exceptionally high level of ingenuity…… although their wives may hold a different opinion! Lastly, and probably the single greatest contributor to the collaboration that created Nick’s Private Charters, LUCK!!!! Which came in the form of timing.

Due to declining cruise ship arrivals over the past few years, Noel had recently shut the doors of his souvenir shop that had catered to cruise tourists for the last 18 years in George Town. He was now in need of a new source of income. Nick, having worked as an employee in the role of captain for a privately owned tour business in Cayman for the last 10 years, was making plans to move to the Dominican Republic. Nick’s wife is from the Dominican Republic, and they had decided to move there and start their own business with the goal of creating a better future for themselves.

Nick and Noel’s paths had originally crossed several years prior, having met through a mutual friend in the local boating industry. They had had only minimal contact since then, but fate was about to change that!

Noel and his wife Tanya, owners of All Tide Up, a Tiara 29 Harbor Edition, were seriously considering selling the boat as they knew they could not afford to keep her. Not wanting to part with All Tide Up as she had been the source of so many wonderful family boating memories, and realizing that she would not fetch a good price in a “buyers” market, Noel was desperately trying to figure out how to move forward without losing her….the boat….that is! Turns out, the answer lied in all of those wonderful family experiences. Experiences that had come courtesy of…… All Tide Up!

Nick, through his extensive experiences as a tour boat captain in the North Sound, had long realized the need for providing North Sound excursions that were of a more personalized and intimate nature. One phone call from Noel was all it took to for him to “get onboard”! It was now time to share All Tide Up with the rest of the world!